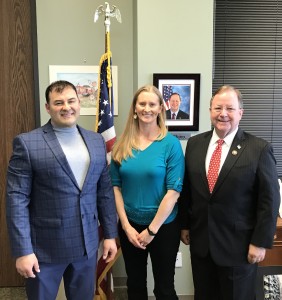 William also noted research according to lack of nutritional education in the medical field. He referenced to a study by Johns Hopkins, more than 250,000 people in the United States die every year because of medical mistakes, making it the third leading cause of death after heart disease and cancer.

Vandry referenced nutrition knowledge is essential for today’s physicians, according to a commentary published in 2019 JAMA Internal Medicine.

Neal Barnard, MD, president of the Physicians Committee for Responsible Medicine, points out that overweight, diabetes, heart disease, and many forms of cancer are driven by unhealthful diets, and most doctors do not have the nutrition knowledge to properly treat their patients.

In a 2018 survey, 61 percent of internal medicine residents reported having little or no training in nutrition. While 94 percent of resident physicians recognize the importance of diet and feel that nutrition counseling should be part of patient visits, only 14 percent feel trained to offer it.

On average, U.S. medical schools offer only 19.6 hours of nutrition education across four years of medical school, according to a 2010 report in Academic Medicine.

What they found is that these programs averaged 2.8 hours of instruction on obesity, nutrition and physical activity counseling, and only 42 percent of them taught the residents techniques for how to perform health behavior counseling.

Given this, it’s not exactly shocking that many doctors would receive a failing grade on nutritional know-how.

A 2016 study in the International Journal of Adolescent Medicine and Health assessed the basic nutritional knowledge of fourth-year medical/osteopathic school graduates entering a pediatric residency program and found that on average, the incoming interns answered only 52 percent of the 18 questions correctly.

“Doctors are more likely than the general population to commit suicide, with an estimated 350 to 400 physicians killing themselves in the U.S. each year.”1

Analyzing the results of 2011 and 2014 surveys of more than 6,000 doctors across the United States, researchers found that the number who met the criteria for burnout rose from 45 percent to 54 percent over that time.  Research has shown that doctor burnout can lead to poor patient care, higher doctor turnover and a decrease in the overall quality of the health care system.2

A 2015 study in the Journal of the American Medical Association reported that 29 percent of resident physicians have depressive symptoms.3

Why are doctors plagued by depression and suicide?

A crisis comes into focus.  More than 62,000 people — many of them medical professionals and their families — signed a petition  calling on medical associations to track physician suicides, provide confidential counseling, and require doctor training programs to address a “culture of abuse” too often characterized by bullying, harassment, and humiliation.  A study published in Academic Medicine finds that 35 percent of medical residents — young doctors recently out of medical school — experience clinically significant depression.4

The discussion of CBD regarding medical facts and research regarding PTSD claims Vandry showed statistics on Post-traumatic stress disorder:

The VA studied 47,000 veterans and found a slight increase in PTSD symptoms from participants that used medical marijuana

Researchers from the US Department of Veterans Affairs analyzed data into the treatment of chronic pain and PTSD in patients.

With chronic pain, the results in one clinical trial showed only 28 percent of participants feeling a change when using nabiximols, which is a mixture THC and CBD.

Also, there was 16 percent of participants who felt a change when taking a placebo.

This suggests psychological symptoms are possible when someone thinks they are feeling pain.

Experts also warn the use of marijuana for chronic pain could lead to an increase risk of harm such as motor vehicle accidents, psychotic symptoms and short-term cognitive impairment.

In this observational study, initiating marijuana use after treatment was associated with worse PTSD symptoms, more violent behavior, and alcohol use. Marijuana may actually worsen PTSD symptoms or nullify the benefits of specialized, intensive treatment. Cessation or prevention of use may be an important goal of treatment.

Congressman Flores assured the Vandry’s he will attempt to contact VA reps he knows and to possible broker a meeting with the Vandrys on helping Veterans with chronic pain, PTSD, homeless status, and back into workforce and quality of life.